My Dad’s terrace is starting to feel like the most boring backdrop for taking pictures. That’s why I took my field trip to Aachen as an opportunity to show off a dress I’ve finished back in December 2013. It did take a lot of commitment to the cause, because I was freezing my ass off. It sure is cold in Northern Germany! (I’m from Bavaria, everthing north of us is Northern Germany for me.) 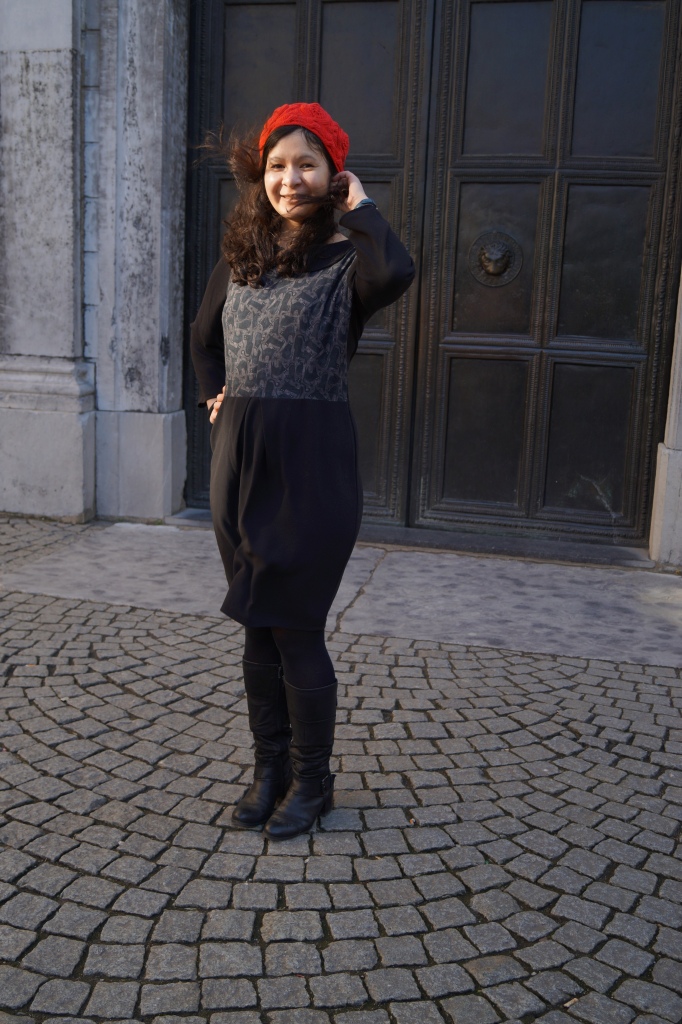 My original plan for this project was a little black dress (pattern here), but through a string of coincidences I ended up with something a lot more fun. I had decided to make a size 38 since the trauma of my pink summer dress is still all too fresh in my memory and I automatically distrust all Burda Young patterns. I had bought not enough fabric for this size, though, so I had to improvise. Going through my fabric stash I discovered I had some leftovers from my awesome cat t-shirt and thought why not? It’d make a more cheerful choice for our dreary German winter than a completely black dress.

Regarding my choice of size, I should have really known better by now. Burda patterns usually have a crazy amount of ease built in, only said pink summer dress seems to have been the odd one out. As you can see, the finished dress is too big for me, but I’m actually okay with that. It’s comfy as hell and very warm to boot. The cat print is so much fun, too! 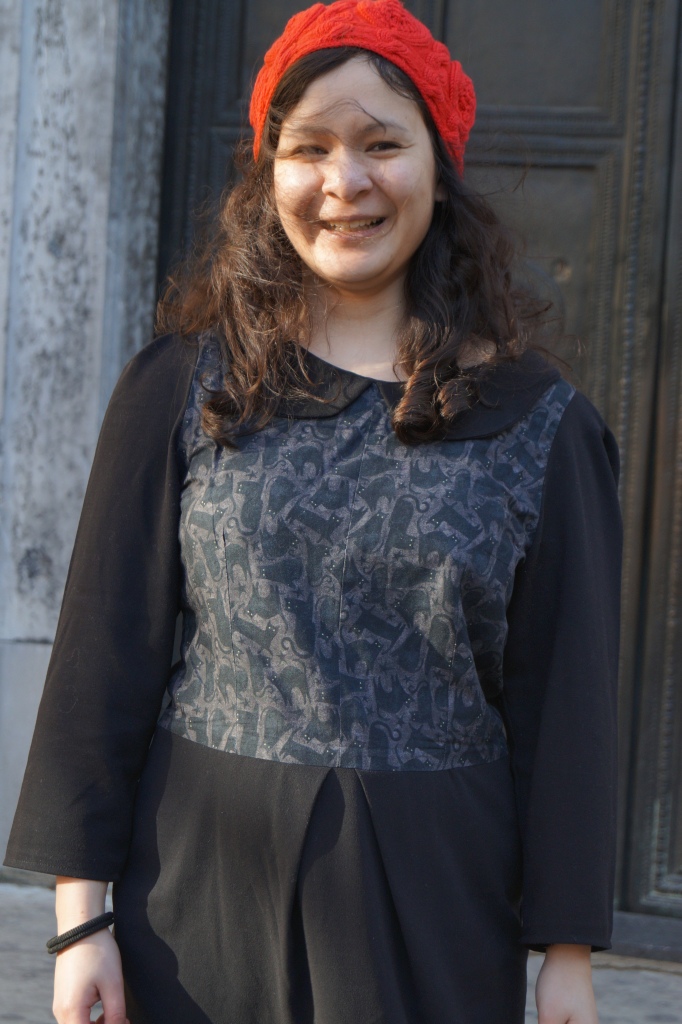 The pictures of the dress were taken by my friend Lisa (thanks again!) in front of Aachen Cathedral. Originally the Palatine Chapel, it was built at the end of the 8th century by Charlemagne, who had begun to spend more and more time in Aachen due to the hot springs that can be found there. It was used as the coronation church for the German kings (and queens) during the Middle Ages. Withstanding many centuries of cold Northern weather, human-made catastrophies and changing tastes and needs, it has been rebuilt and expanded many times. Gothic, Baroque and Wilhelminian master builders have left their mark there, following in the footsteps of their Carolingian predecessors. (Click on pictures to enlarge.)

As you can probably guess, I’m not much of a fan of the changes that were made in the 19th century, but it’s pretty damn impressive when you first enter the church. My lacking enthusiasm with all the Neo-something splendor on display is mostly due to the fact that I’m really REALLY into the early Middle Ages and once you’ve seen the 19th century version of the early medieval church it’s really hard to picture it a bit more … accurately in your head, as far as that’s even possible.

I was very much into this, however:

Otto III.’s tomb! I’ll forever have a weakness for the Ottonian dynasty and Otto III. is my favourite as far as the male members of the family are concerned – I wrote my first paper at university about Theophanu, his mother, and some things just stick. (It’s like the moment when you become a fan of your favourite football club, it’s not always very rational but that’s how these things work.) There are a lot of pretty things to find in the Gothic choir, too, and I can only recommend the treasury next to the Cathedral for another plethora of very pretty things.

Aachen itself isn’t much to write home about, unfortunately. It seems to have been largely destroyed during WWII and rebuilt in the blandest way possible. A little way from the Cathedral there’s the Gothic town hall, which was built on top of the Carolingian aula regia. It’s a nice building, but they might want to clean it up a bit. All in all, it’s pretty sad if you realize that this little city was once at the epicentre of Charlemagne’s empire. 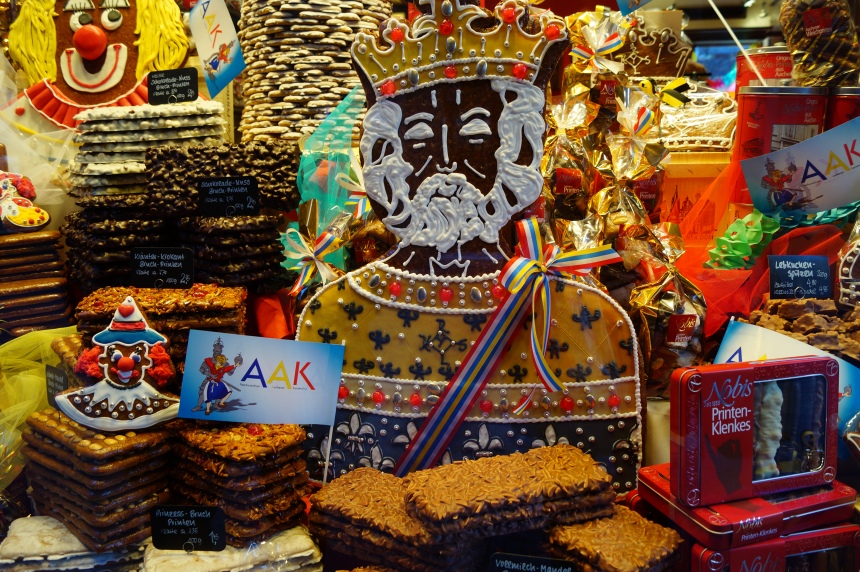 Last but not least, why “Three Cities, Three Dresses”? You see, after realizing my little black dress (with added cat goodness) was one size too big, I made two more and wore them in two different cities. If you liked to see a post combining sewing projects and travel guides, tune back in for Heidelberg and Ulm!

EDIT: Click on the pictures below to go to the other two installments of this little mini-series.

I fell in love with this dress shown in the "Fashion?!" exhibition at the Landesmuseum Württemberg in Stuttgart. It was designed by Marie-Luise Carven in 1955 in Paris. It looks so happy and cheerful, it feels like spring! 🌱🌷 #landesmuseumwürttemberg #fashion #marielouisecarven #carvenparis
Change of scenery ❤🇨🇵 We just had to get out and away for a day. #france #strasbourg #gothiccathedral
It’s hard to keep up with good habits when you feel like your body fails you. Every time you put out a fire, another one lights up. Your eyes are better – how about some tendinitis? Suddenly it’s good news when things stay the same: your tension neck syndrome is still that and not a slipped disk, thank God! It’d help not to drown in that sinkhole of depression and self-pity if you could escape into your hobbies, but alas: The things you loved to do become the things that cause you even more pain.
I'm really happy with this oat bread! The oats need to soak in water for about eight hours. Then I mixed them with rye and wheat flour, sourdough, honey, salt, and yeast, let the dough rise, and baked it on my new pizza stone. The crust is amazing!
There's a seating hierarchy in this household, and it's cats >>>> humans. 🐱👑
I made orange jam cinnamon rolls for a little Jan 1st brunch. Let's have a sweet & delicious start into this new year! 🎆
Happy New Year! 🎆🥂🎉 #hello2022
Mood 💫
Loading Comments...
%d bloggers like this: