Do you have that ONE project? That project that caused you nothing but pain and suffering pain and also did I mention the pain?

I bought the yarn approximately four years ago. I recently learnt it’s the colourway “erika”, which I find very pretty for a yarn that came from the deepest pits of hell to personally torture me. (I’m not even kidding. This is like the Darth Vader of yarns.) I was oh so young back then and went about my very first sweater project (how proud I was, oblivious of the years it’d take to have a finished first sweater from a completely different pattern) with unbridled enthusiasm. I had originally thought of a completely different pattern, soobeeoz’s Leafy Lace Cardi. In three attempts I never managed more than the first few rows: I’m inclined to attribute it to user idiocy, but on the other hand one of the comments on Ravelry calls the pattern writing “ambiguous”, which is pretty much how I remember it.

In the early autumn 2012 I frogged the entire thing and, after my big success with Enchanting in Black and White, decided the yarn was perfect for A Stitch in Time Vol. 1’s Cable Bolero. Painfully learnt lesson #1: Always, ALWAYS check how many projects a pattern has on Ravelry. IF IT DOESN’T HAVE MANY EVEN THOUGH THE DESIGNER IS POPULAR IT’S PROBABLY NOT SMART TO KNIT IT ANYWAY. If you still want to try it, at least use your very best research skill to find out why (=read the project descriptions on Ravelry). If I could go back in time and slap my 2012 self for neglecting to do so, I’d be very very happy. 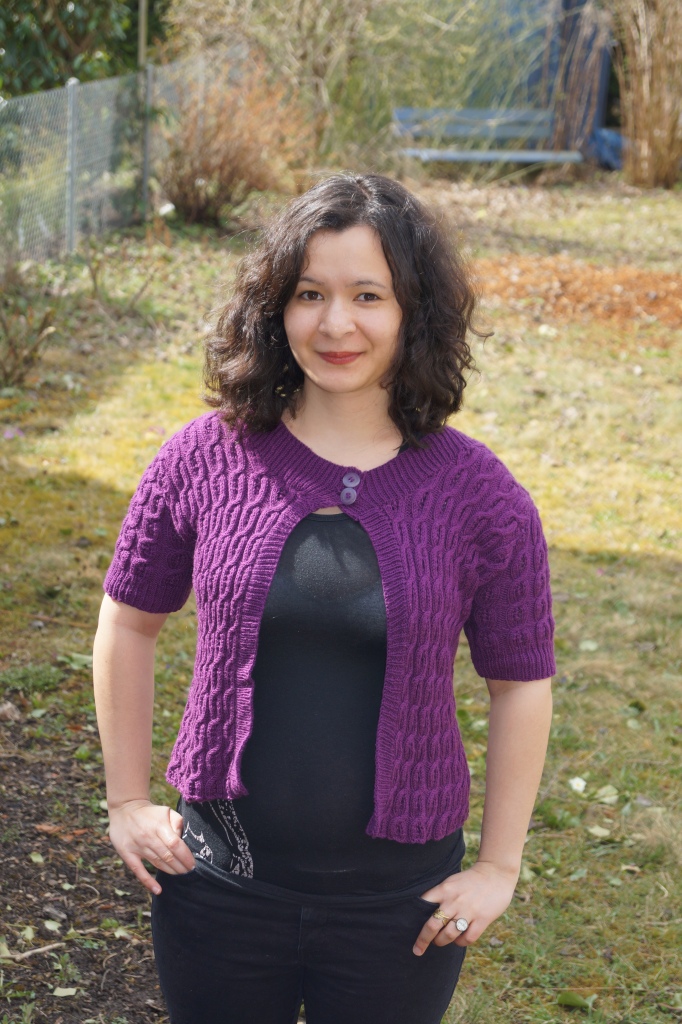 FACTS: The stitch count is wrong literally everywhere in this pattern. Personally, I had no problems knitting the back piece, but I knit the first front piece three times and couldn’t get the stitch count in the armhole and neck shaping right. Never. (Someone on Ravelry had the same problem with back and front pieces.) Part of the problem for me was the description:

It took me a while to figure out I had to continue decreasing at the armhole even after starting the neck shaping to decrease to 28 stitches without producing a garment that would fit a giraffe. I’m not sure if that’s the solution, but it got me to a point where I had the same number of pattern repeats in the front and back, so you might want to try that if you’re knitting this pattern and are about as desperate as I am. Remember: It doesn’t matter how mad you get at the pattern, it’ll just be like “THAT’S HOW I ROLL, DEAL WITH IT”. The moment I gave up trying to figure things out (about a year after starting the project) I’ve had a much better time with this pattern; or maybe I’ve gotten mellow with age and the utter depression the sight of this asshole of a project caused me. But just as I thought I had reached the end of this ordeal, the pattern looked down on me and kicked me in the shin, the little bastard. You see, the stitch count ALSO doesn’t add up in the front bands and the collar, but at that point I just went “fuck it” and kfab to get the right number of stitches.

I shouldn’t have done that. I should not have done that. You see, it says “blocking is not recommended for this stitch pattern” in the book, which made sense to me, seeing as the little cable-y things with the yarnovers inside them were probably very prone to growing bigger after blocking. Neither the blocking nor the cable pattern were the problem, though. After (hand)washing it the second time, I seem to have stretched it too much when laying it out to dry – and the collar literally grew three sizes that day. You guys. I nearly had an aneurysm. There are a few pictures on my computer with me wearing the cardigan that are perfectly terrible, and by that I mean I looked like a troll. After washing it again, it mostly went back to its original size, but: if I ever knit this pattern again, which is higly unlikely after the grief it caused me, I’ll reduce the stitch count at the collar dramatically.

I’d also do different button holes, because these didn’t end up looking so good:

After all this venting: is it all bad? No. In its current state I quite like it. The cables look really pretty and the colour is lovely and vibrant. The cardigan is nice to wear. I’d just not recommend, you know, knitting it. Save yourself the headache and cast on one of the other gorgeous projects in A Stitch in Time Vol. 1. Unless of course you’re a more experienced knitter than me, then knock yourself out.

I should perhaps also say that I have another project from A Stitch in Time Vol. 1 waiting to be photographed and I love knitting it and it’s totally gorgeous. I’m not always that negative! This book continues to be my favourite knitting book, even after this cardigan.

Pattern: Cable Bolero from A Stitch in Time Vol. 1 by Jane Waller/Susan Crawford

Other A Stitch in Time projects (click on pictures below):

13 replies to A Stitch in Time: Cable Bolero

I've been away to a conference in Austria the past couple days, and it was overwhelming and inspiring at the same time. Writing my PhD is one of the most challenging things I've done in my life - I needed the motivation to sit down and (hopefully) finish it! #austria #styria #steiermark #baroque #baroquechurch
This picture is so cute it needs to be on the grid as well, right? ❤ #lamarchesa #cats #catsofinstagram #catstagram #britischkurzhaar #britishshorthair
Paradise 🏖 #italy #tuscany #mugello #mugellogram #mugellovacanze
Breathtaking! 😍 #firenze #florence #italy
Celebrating my favourite person's birthday in this gorgeous garden! 🥰 #love #gardeninspiration #beautifulgardens
🌺💖 #summer #gardening #flowersofinstagram
These days I often feel very uncomfortable having my picture taken, but I'm glad I didn't give in to the pernicious voice of my body image issues the day we shot these because I think they turned out lovely!
Yes, another picture of my cat, because looking at her makes me happy. ❤🧡💛🐱💚💙💜 #lamarchesa #cats #catsofinstagram #catstagram #britishshorthair #britischkurzhaar
Loading Comments...
%d bloggers like this: