Anushka of Tailoring Tales has made me wish I had posted about my fitting problems regarding the Pocahontas dress sooner. My original plan was to update as soon as I had done something new, but real life tends to get in the way of such plans … Anyways, she suggested to bone the bodice, which I might still try to do if there’s an occasion to wear this dress a second time. 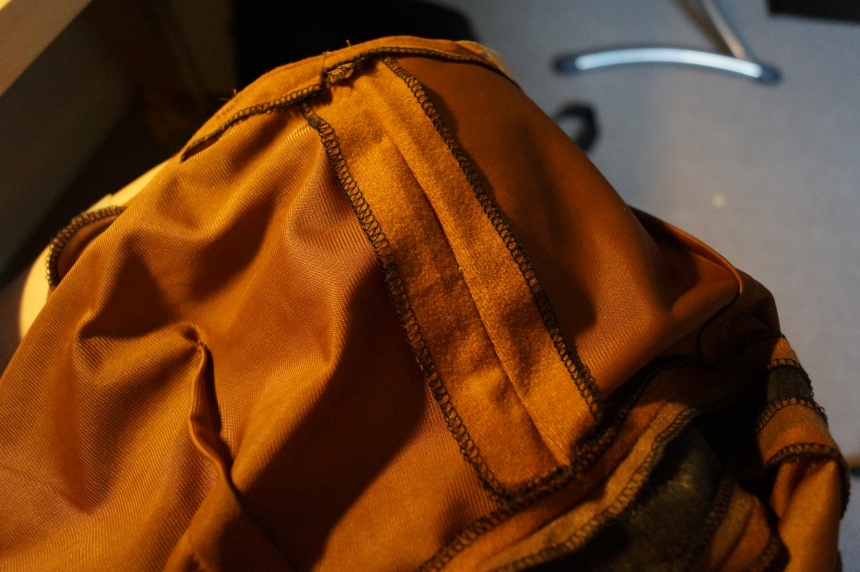 I ended up taking in the side seams of the bodice about 0.5cm on each side. It made the dress stay up a lot better, but the insides look a bit funny now. If you look closely at the pictures at the end of the post, the darts on the bodice and on the skirt don’t line up anymore either. Naturally, since I didn’t take in the side seams of the skirt as well. If this had been a normal dress without a definite deadline, I would’ve taken the time to make everything line up correctly, but in that case I had to cut these small but time-consuming detours. Another reason was this lovely little lady:

This is my Grandma’s old sewing machine. I took it to Heidelberg a while ago, but never got around to taking it for a spin. It’s the Bernina Matic 910 Electronic. I’m happy to report it still works! Mostly. The bobbin thread has a little hiccup, by which I mean it gets hopelessly tangled up sometimes. Not bad for a machine that hasn’t been touched in at least 20 years, but also not ideal when you don’t have much time! Otherwise her and me got along just fine. My mom’s sewing machine – the one I usually use – is a Bernina as well, so I had figured out all necessary functions rather quickly. (Although I’ve no idea how to do a zigzag stitch, but that might be my own daftness.) Still, I might take it for a check up … 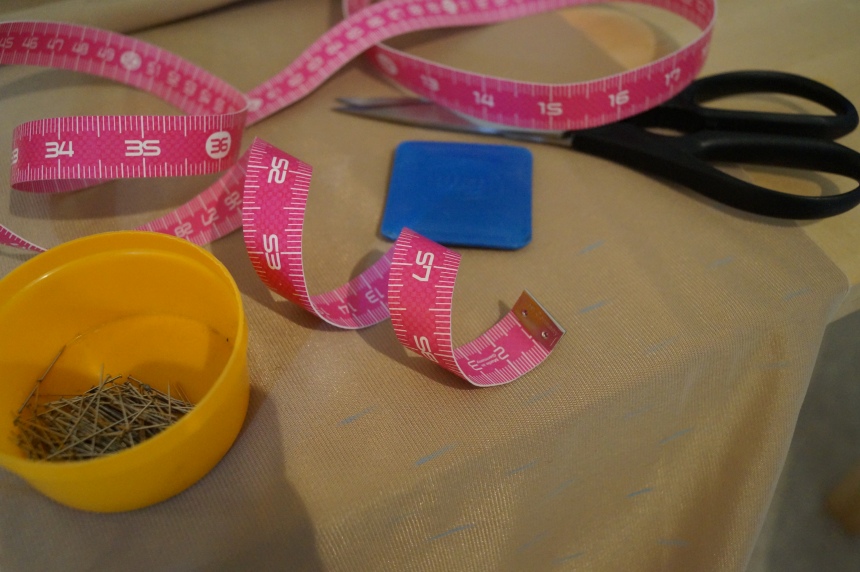 This left the fringe. I admit I put off doing it for the longest time because I hate stuff like that. In the end, I took a long rectangle and folded it in half after determining that this length would look good on the dress. I used tailor’s chalk to mark every 2cm and then started cutting into the fabric, but left about 1.5cm at the folded edge – which I cut open afterwards. (It bothered me a bit to leave the edges raw, but I had no idea how to do it otherwise. I mean, in the end it’s a costume that’s meant to be worn once, maybe twice, so there isn’t gonna be much of a problem with wear and tear.)

I tried to sew it on like in the movie. Mostly I think it’s fine, but especially at the shoulders you can see that real world gravity works decidedly different that cartoon gravity. 😉 Luckily, the wig covered most of the wonky spots later! The pictures below are post-fringe, but pre-ironing by the way. Forgive me for the wrinkles and creases! I’m rather pleased with my first time changing a pattern so drastically. I especially loved working with the fabric; I’m already thinking of ways to incorporate faux suede in my real life wardrobe! 😀 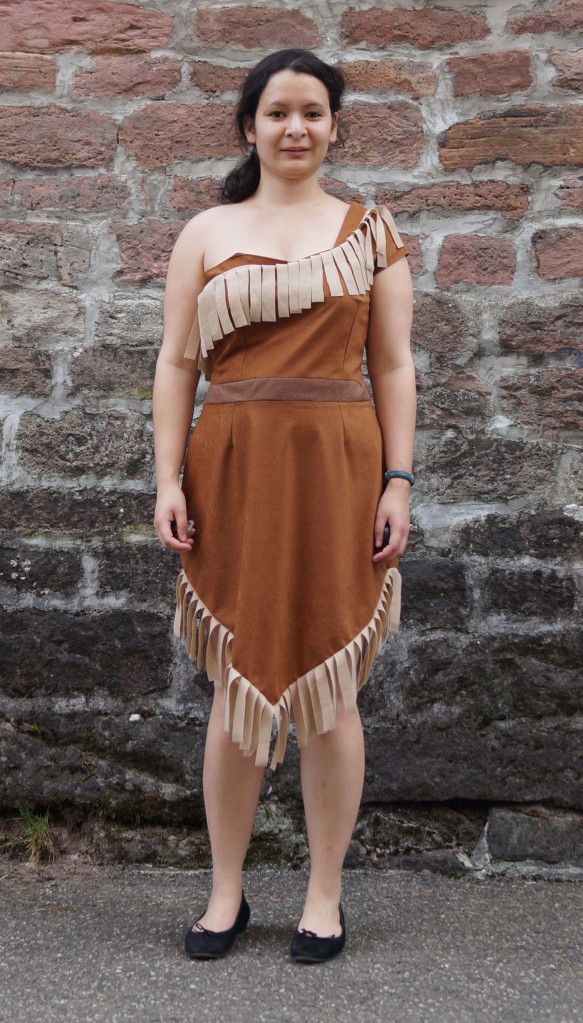 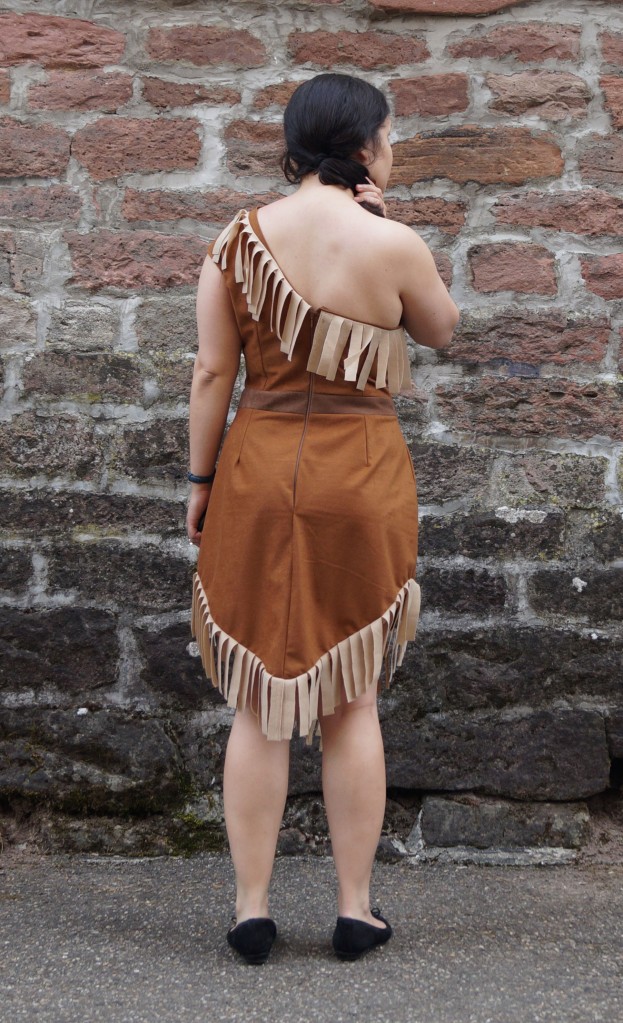 I fell in love with this dress shown in the "Fashion?!" exhibition at the Landesmuseum Württemberg in Stuttgart. It was designed by Marie-Luise Carven in 1955 in Paris. It looks so happy and cheerful, it feels like spring! 🌱🌷 #landesmuseumwürttemberg #fashion #marielouisecarven #carvenparis
Change of scenery ❤🇨🇵 We just had to get out and away for a day. #france #strasbourg #gothiccathedral
It’s hard to keep up with good habits when you feel like your body fails you. Every time you put out a fire, another one lights up. Your eyes are better – how about some tendinitis? Suddenly it’s good news when things stay the same: your tension neck syndrome is still that and not a slipped disk, thank God! It’d help not to drown in that sinkhole of depression and self-pity if you could escape into your hobbies, but alas: The things you loved to do become the things that cause you even more pain.
I'm really happy with this oat bread! The oats need to soak in water for about eight hours. Then I mixed them with rye and wheat flour, sourdough, honey, salt, and yeast, let the dough rise, and baked it on my new pizza stone. The crust is amazing!
There's a seating hierarchy in this household, and it's cats >>>> humans. 🐱👑
I made orange jam cinnamon rolls for a little Jan 1st brunch. Let's have a sweet & delicious start into this new year! 🎆
Happy New Year! 🎆🥂🎉 #hello2022
Mood 💫
Loading Comments...
%d bloggers like this: