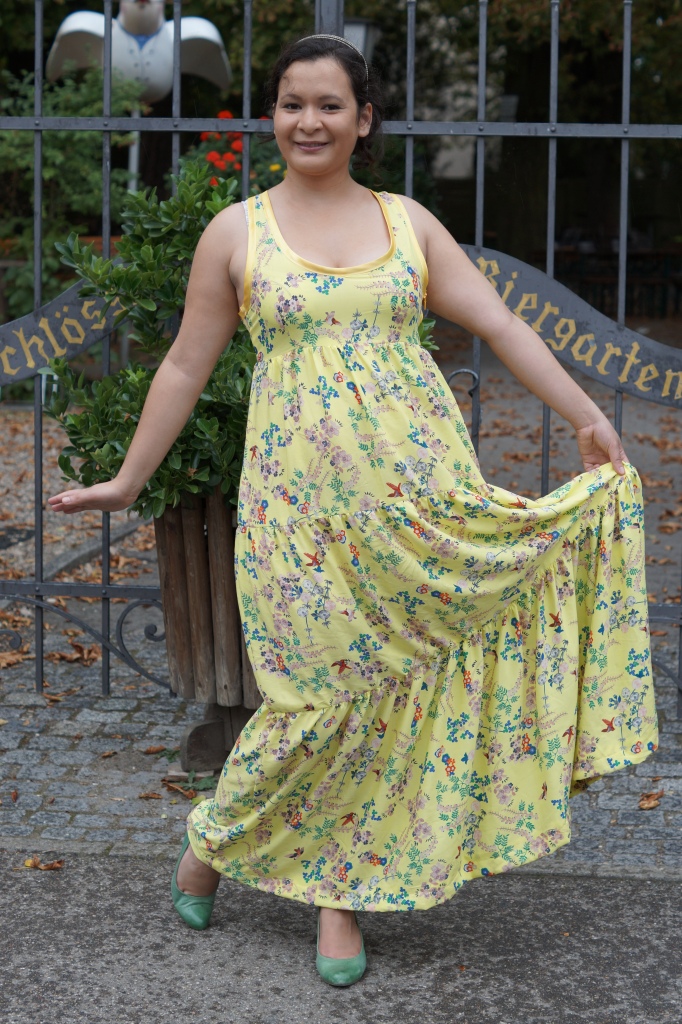 HEY GUYS I JUST MADE SOMETHING AMAZING!!

Maxi dresses are awesome I’m sorry I ever doubted you! 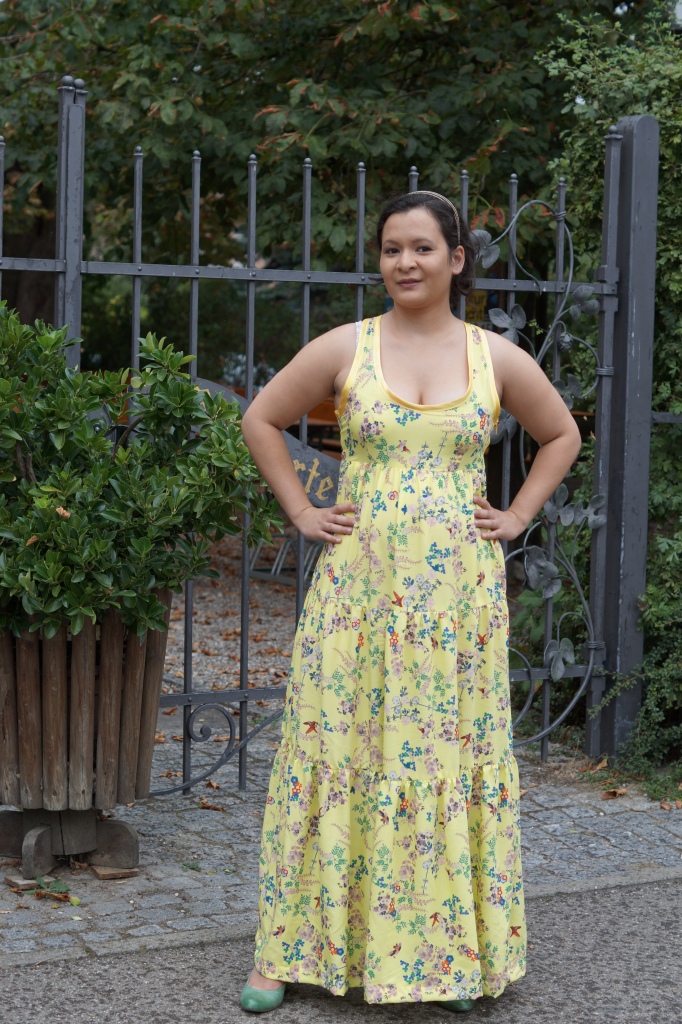 Phew, OKAY. Just needed to get that off my chest.

As I just said, I’ve always sideeyed maxi dresses, mostly because I didn’t understand how you could wear them without involuntarily cleaning the boardwalk at the same time (can you? I need intel!). But as the summer went on and heat wave after heat wave descended onto Germany, I started to be jealous of all the maxi dress wearers of Heidelberg. They seemed so comfortable, and as cool as you could possibly be in that scorching heat. In the end, I looked my friend Lisa of Mrs.O.Gehry And Her Curves, who rocks the maxi dress on the regular, in the eyes and told her I wanted to sew a maxi dress.

So I did sew one. 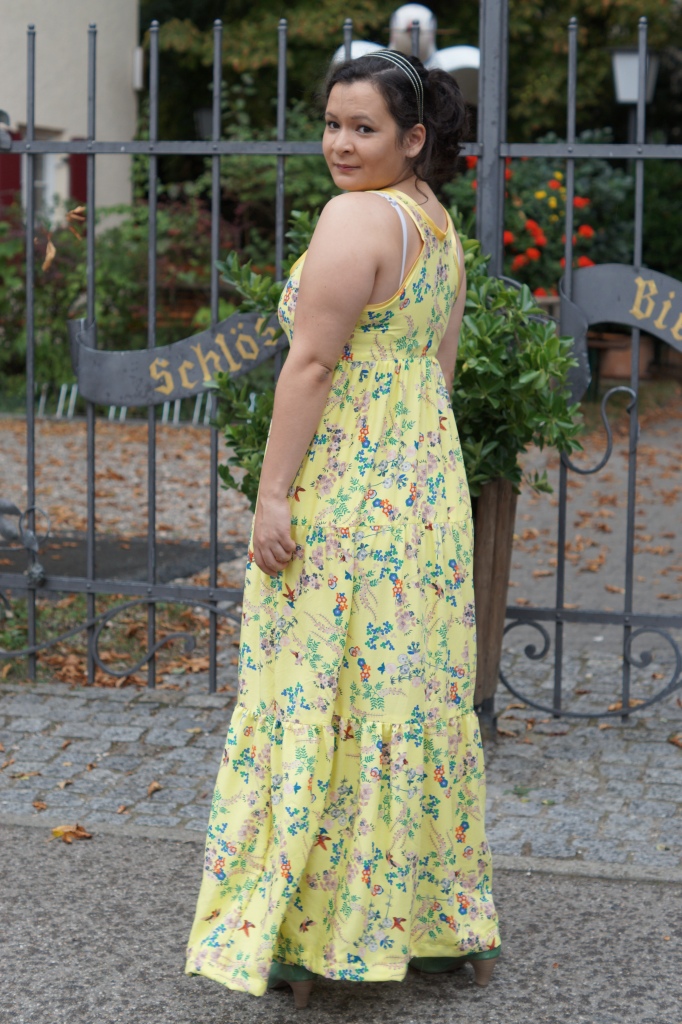 I found this amazing print on the sales table at the local fabric store. It’s got little birds on them – too cute! 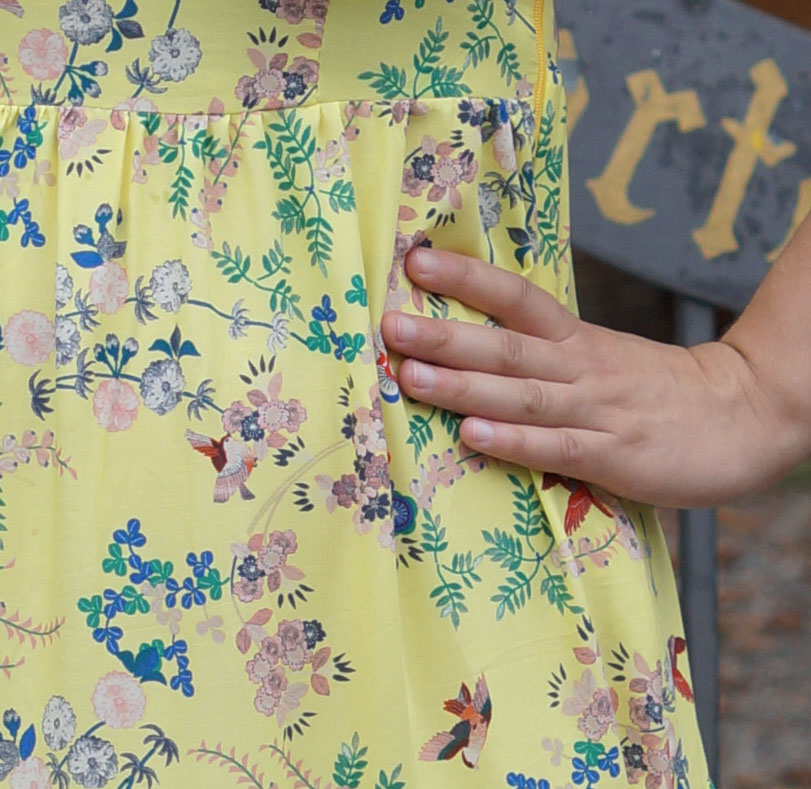 It’s pretty obvious from the picture that I cut the fabric the wrong way, so I’m not even going to try and deny it. I’m sorry, little birds flying horizontally towards my boobs or diving nose-first into the pavement! It was the only way I could squeeze the ginormous pattern pieces on the fabric. 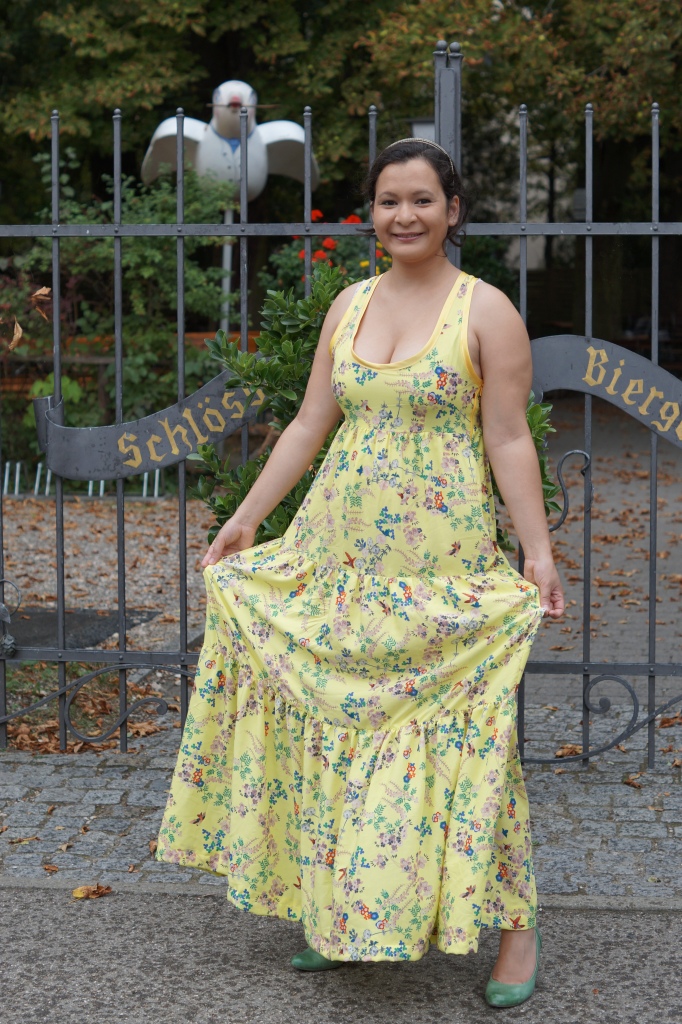 The pattern is No. 113 from Burda Style 05/2010 – a relatively simple project if it hadn’t been for the technical hiccups that pretty much occurred right from the start. You see, my mother’s overlock is a moody old lady. She works when she wants to, but all too often she just doesn’t really want to work … With a lot of effort, we manage to serge the edges of all the pattern pieces. Then I realized the bodice pieces wouldn’t fit and I had to trace the pattern a second time, going up one size to 38. Afterwards, I just didn’t have the nerve to deal with the overlock again, so I decided I’d use bias tape to finish the edges. Of course that ended up being a bust, too. The straps of the dress were far too narrow to turn the bias tape at the neckline and the armhole both. 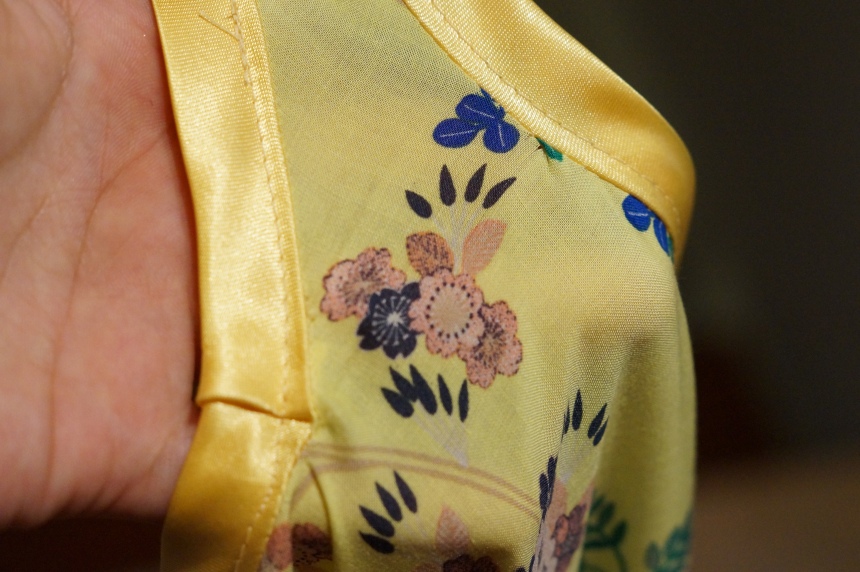 A bit frustrated at that point, I employed an age-old tactic: I sewed the bias tape on so that it was visible and pretended to myself that I had meant it to be that way. 😀 There’s a bit of gaping going on because I forgot to cut little notches into the edge, but honestly it doesn’t bother me that much. (I want to be a technically diligent sewist so badly, but I’m too lazy for that.) 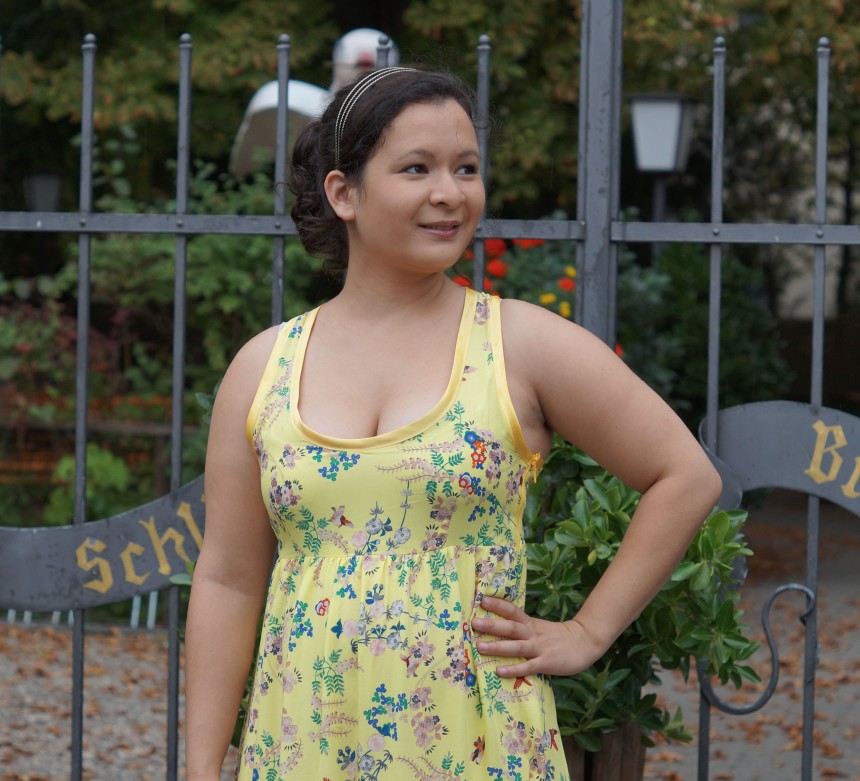 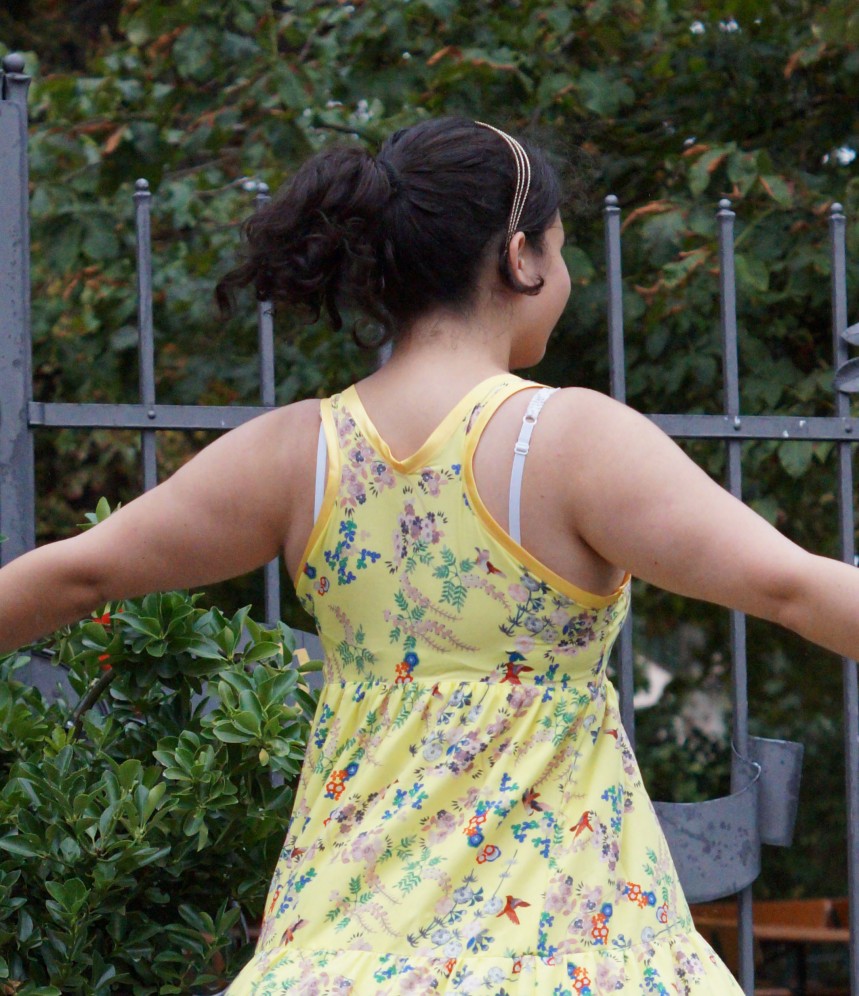 The bias tape was a leftover from my Spring Dress – I had been very generous with my purchase back then. At first I was afraid it would look horribly shiny next to a delicate fabric like this, but I’m pleased with the result. Sometimes accidents turn out a blessing in disguise!

As much as I adore this dress, I really gotta say it was a bit of a shock going back from the wonderfully thought-out, detailed Sewaholic instructions to whatever Burda’s doing. I knew I’d have to gather the two bigger rectangle pieces, yes, but it was kind of weird that the instructions just told you to stitch them to the rest of the dress. Also, for some reason they tell you to buy a 40cm zipper even though you only need 25cm … can somebody explain? I ended up cutting the rest off, then stitched over it and sewed on a little piece of bias tape, but I could’ve saved some money on a smaller zipper! 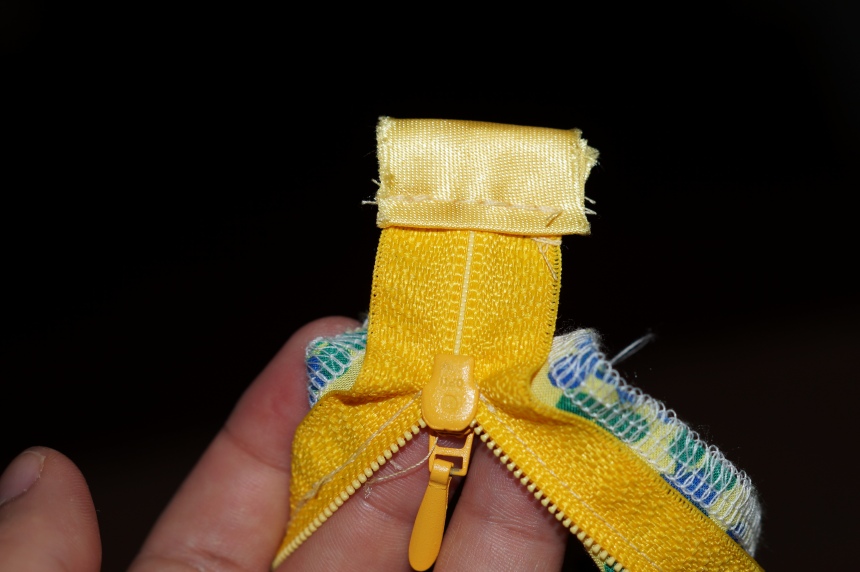 Never mind that. I’m absolutely in love with the dress! I basically want to live in it. It’s soft and comfortable and cool! Maybe next summer I’ll make another one … (I just gotta remember to cut off at least 10cm, because boy was that pattern designed with a taller person in mind!) So I can keep doing … 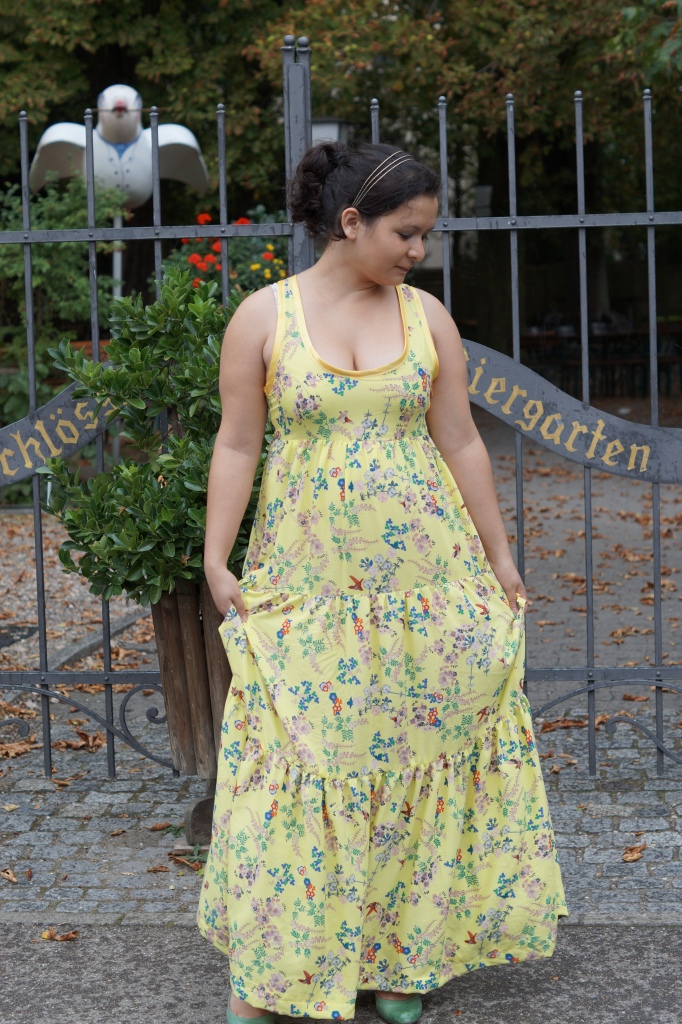 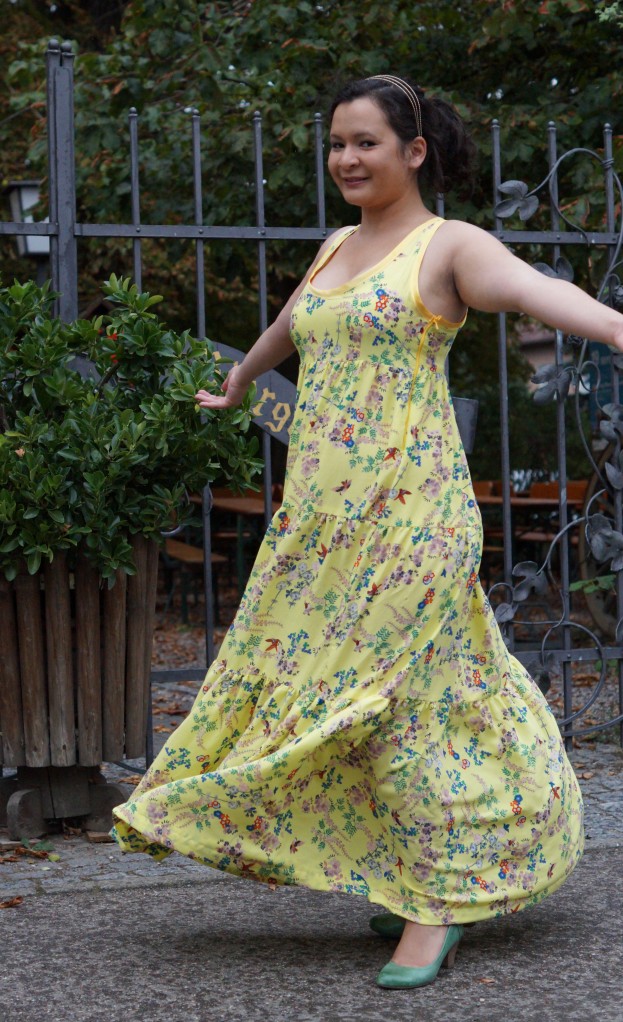 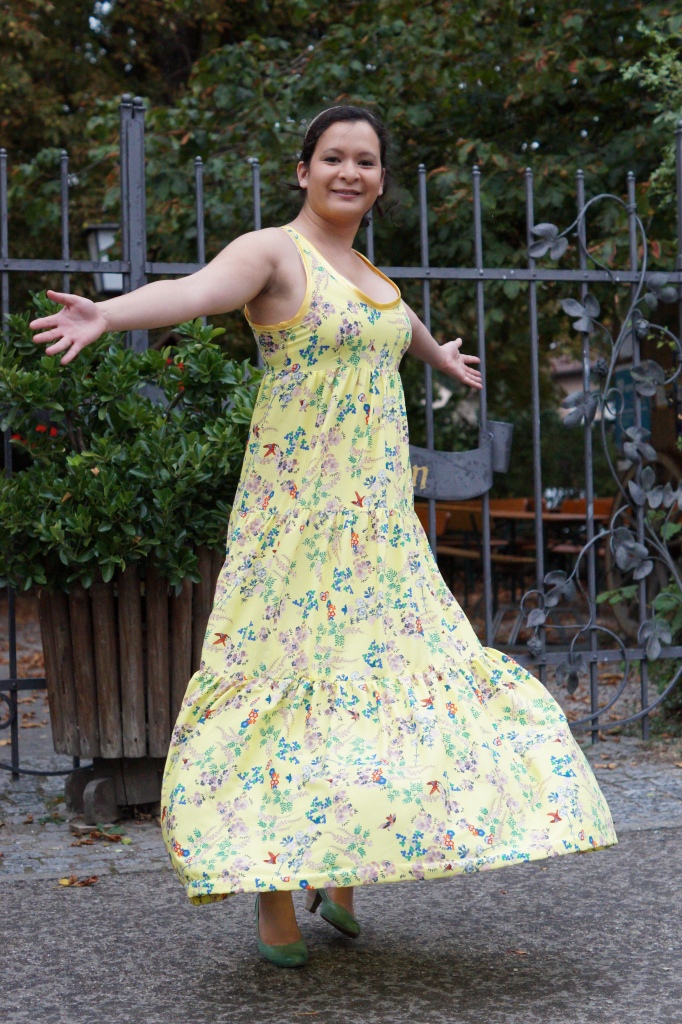 … and whatever I was doing here … 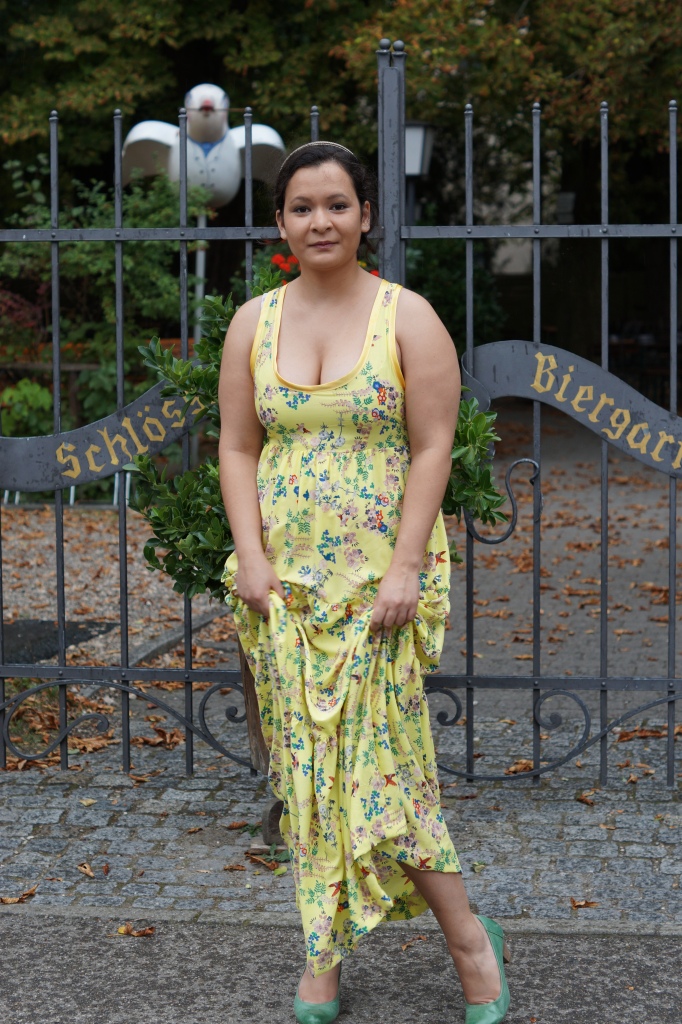 … because I probably won’t be able to do it this year. I just happened to finish the dress the day rainy, windy autumn showed up and ruined maxi dress wearing for the foreseeable future. Such a spoilsport, that autumn!