I like cooking. I’m not a fantastic cook, but I find after a stressful day there’s nothing that cheers me up like a homecooked meal. As I’m one of these insane people that responds well to the “learning by doing” approach, I slowly taught myself how to cook over these past years. Believe me, you learn pretty fast if you have no choice but to eat what you just made (or go to bed hungry). I also can’t stand any kind of pre-processed or convenience food. Horse meat in lasagna? Doesn’t happen to me.

Anyway. At some point I decided it would be awesome to have my own little herb “garden” on my window sill, because the frozen herbs I bought had a taste comparable to paper pieces painted green. First I bought rosemary, then basil, and in the end I added chive and parsley. This is how it looked like ….

The picture above was taken in January, in February I threw out everything except the basil, which for some reason steadfastily endured the not-so-ideal light or lack thereof in my north-facing window. I pouted until my Dad suggested I’d grow herbs myself. And since my Dad is awesome, he bought me seeds and a tiny “green house” the next day. You could put a see-through lid on it and then you had your own miniature water cycle! It was the best thing ever. 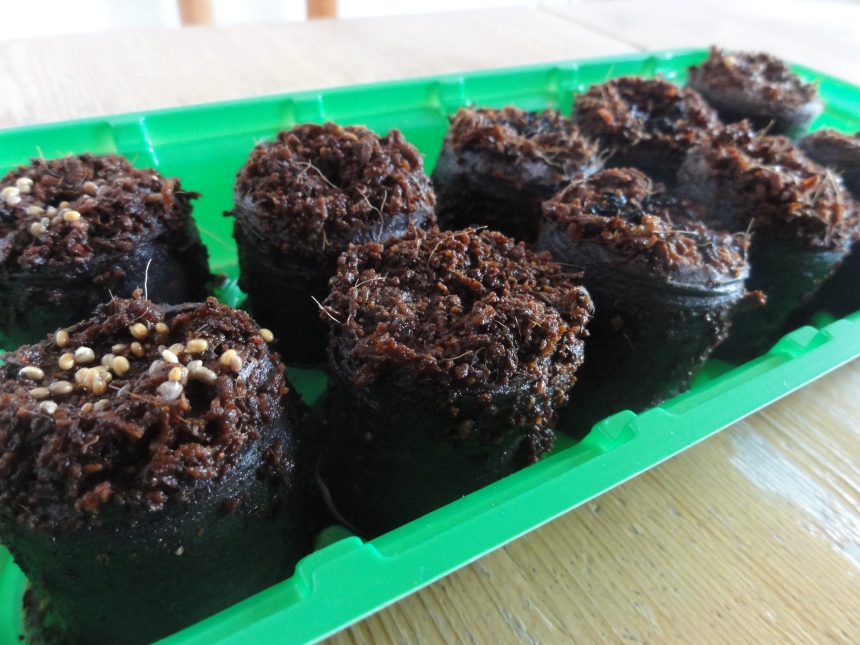 I planted the seeds right away; my Dad had bought my parsley, oregano, chives and rocket salad. I also decided I’d take a picture every week to document the process.

As it turned out, I should have taken a picture every other day, because the rocket salad grew as fast as all your aunts ever told you’d grown since they last saw you. Soon I had to take off the lid, because the salad had outgrown it. The chive was trying to keep up, whereas the parsley was a bit shy to show itself. Don’t be like that, parsley! I’m a nice person, promise. 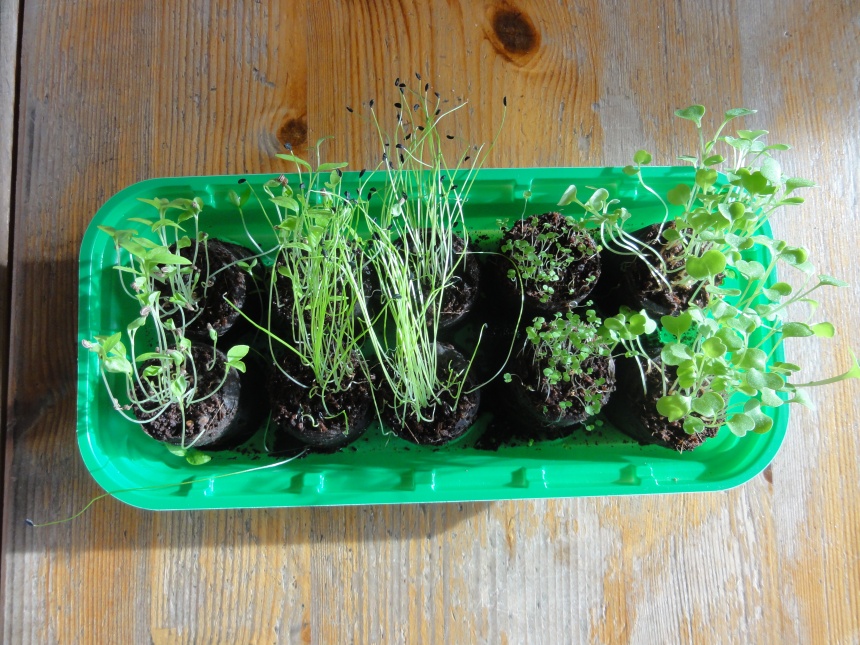 The parsley heard me, as it seems, because it was like, dude, what are you talking about, I’m not shy, I just don’t like to hurry, it’s bad for the heart. See what happened to the salad? Hasn’t grown much since last week. That’s because it’s exhausted! (Why yes I talk to them. Don’t look funny at me like that. It’s not like I gave them names, that would be silly.) (Well I do have a plant that’s named after Alexander the Great’s father, but that’s perfectly normal, right.)

Since they had outgrown their little green house, I decided I’d put them into pots. It was pretty exciting, let me tell you, and I made quite a mess in my Dad’s kitchen. It was so cold outside that I refused to leave the warmth of the house, though. It would’ve been a shame if my little herbs would’ve been cold. Or me! I don’t like to be cold. But they look quite handsome in their pots, don’t they? The oregano is still the baby in the group and the chive looks rather disheveled, though. Maybe that’s his rebellious phase. Soon it’s going to listen to Evanescence and write depressed poetry! I can’t wait.

I think my herb experiment looks rather promising so far. I can’t wait to use them for my cooking, but that will probably still take some time. It’s been really fun either way and if I had a garden I’d try my hand at some more gardening!

That’s it for today. I hope you enjoyed this post; comments or likes are love! ♥