My friend Jasmin gave me this wonderful fabric for my birthday from a Finnish fabric store called Eurokangas which sounds like the best fabric store ever. Jasmin knows what I like, so of course this moody fabric with little red flowers was right up my alley.  (The reproduction below is really bad by the way; in reality the fabric has a more black and brown look to it.) It feels like something a heroine from a Gothic novel would wear, doesn’t it? Thanks again for the lovely gift, Jasmin!

Only a few month back, I would’ve wanted to make a dress with a circle skirt with this, but as I’ve written in my last sewing post, circle skirt dresses and I have come to a difficult point in our relationship: we’re bored with each other. Apart from the fact that I didn’t have enough fabric for a circle skirt anyway, this fabric called for a different silhouette. On my search for the right pattern, I kept coming back to this Burda pattern, mostly because it also has sleeves; I have a bit of a hate-on for my upper arms right now and try to keep them covered as much as possible.

It turned out I didn’t have enough fabric for the pattern. But when I set my mind on something, I won’t give up easily. I had some leftover black jersey fabric which seemed a fabulous choice for colour blocking ….. I go back and forth on the question if that really was the right choice. During the sewing process I sort of regretted that I didn’t buy brown jersey – when I first looked in the mirror wearing the dress I congratulated myself on my ingenious way with colours – now that I see the pictures I’m undecided again. In general I’m unreasonably scared of colour blocking because my sewing teacher back then told me that I “wouldn’t want to be tacky and just slap two fabrics together indiscriminately”. Now every time I want two use two different fabrics in the same project, I second-guess myself even though I know it’s silly.

The pattern itself was actually rather clever for a Burda design. The two belt straps that define the waist are sewed into the pleats at the front piece that shape the bust at the same time, then buttoned together on the back. I was really scared I’d fuck up all that precision work (I don’t have the patience for details, I’m a bigger picture person) (the pattern has belt loops …. belt loops! shudder) (I’m not even kidding, belt loops are too tiny and detailed for me), but in the end I was to fascinated by the design to even remember that I actually hate details.

I know the dress bunches up at the back, which I mainly attribute to the stiffness of a fabric meant for quilting. I … don’t really mind, to be honest. I admire the seamstress that won’t give up until all the details of her project are perfect-perfect-perfect, but I’ve come to realize that I’m kind of okay with flaws as long as I feel good wearing the garment. Which I do in these case – very much so! The only thing I’ll want to change the next time around (and even on this dress if I feel particularly bored) is handstitch the facing to the bodice. The instructions tell you to stitch it only to the seam allowances and the button facing; I did side-eye this initially, but then decided to ignore my doubts mainly out of sheer laziness. To state the obvious: not a good idea, super awkward. 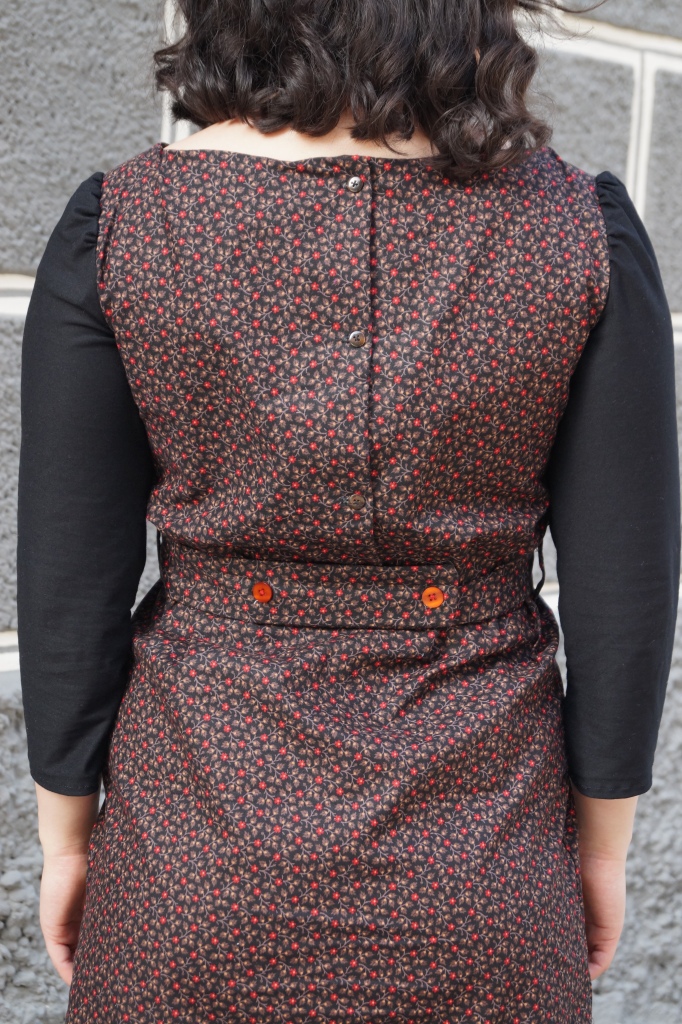 These are by the way the first time I made buttons holes on my own. Previously I’ve always had a helping hand to guide me gently through the intricacies of button hole making! Turns out it’s not even all that hard and actually kinda fun. That meant however that I got to use some of my Grandma’s button! I’ve been generously given all of my Grandma’s sewing and knitting stash by my Dad and uncle because she probably would’ve come back from the afterworld personally to kick their sorry arses otherwise. I used three small brown buttons for the button panel at the back that were meant to blend in with the fabric, and two fire-alarm coloured ones for the belt straps. I love that part of this dress is now my Grandma’s legacy! (Although, Grandma, I really don’t know what you planned to do a gajillion bedclothes buttons …) 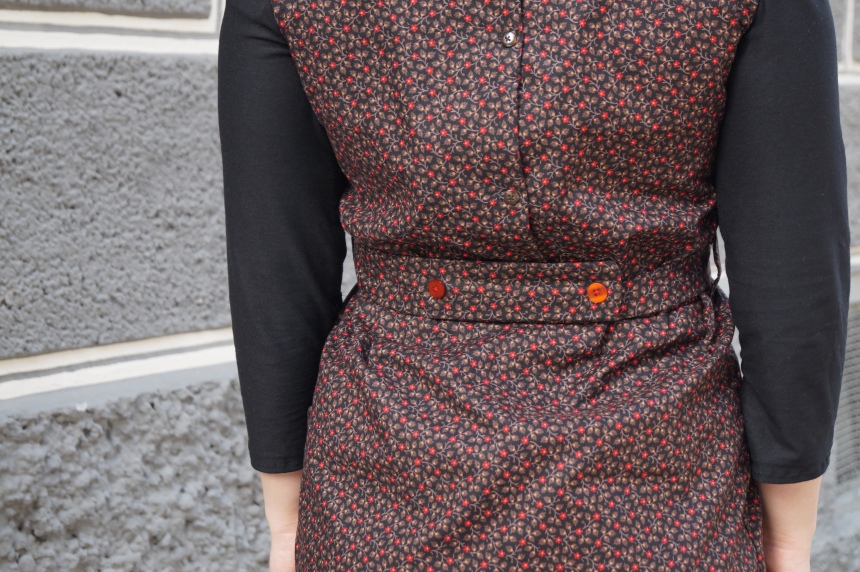 10 replies to In Which I Sew On Belt Loops